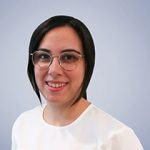 “Children with Speech Sound Disorders (SSD) have gaps and simplifications in their speech sound systems that can make what they say difficult to understand.” (Bowen, 2015, page 3)

Parents commonly wonder what these gaps and simplifications are, and how they are addressed. This blog post is a collection of answers to the questions that parents ask me frequently:

What is the cause of my child’s Speech Sound Disorder?

As summarized in Fig. 1, traditional classification models identify organic types of Speech Sound Disorders (SSD), where an underlying medical condition is thought to be responsible for the presence of SSD: a genetic variation, sensory-perceptual deficits, or trauma/surgery. Such causes can determine various presentations, including: “Speech delay”, “Apraxia”, “Dysarthria”, “Cleft palate” and “Hearing Impairment”.

Residual speech errors, or difficulty producing specific sounds, such as having trouble articulating /s/ or /r/, are thought to be caused by environmental factors alone, and therefore categorized as functional, instead. Another example of functional speech sound disorder is Phonological Disorder: systematically mistaking one class of sounds for another. For example, short sounds for long sounds, which would cause your child to say “peet” instead of “feet”, or sounds produced in the front of the mouth for those produced in the back of the mouth (saying “tat” instead of “cat”). 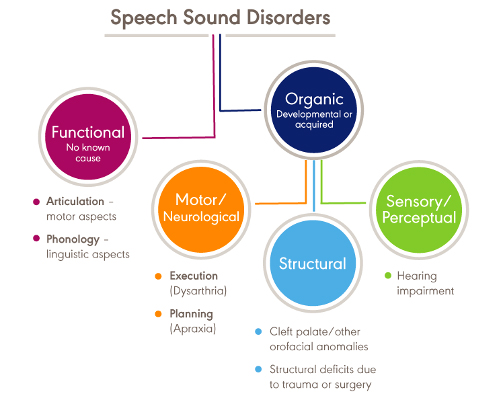 Does identifying the cause help us determine which therapy approach to use?

An organic vs. functional distinction provides only some information about the nature and severity of your child’s SSD, and the type of treatment indicated. When speech and language therapists meet your child, they develop a series of hypotheses which are then systematically tested to locate the breakdowns of the psycholinguistic abilities required to process speech sounds. These include:

These are the classifications we are truly interested in from a therapeutic perspective! Once we have a better understanding of the affected parts of speech processing, we can prescribe an effective approach to strengthen those elements of speech production.

What does therapy look like for a child with Phonological Disorder?

Phonological Contrast Intervention is the elective approach because it is grounded in research. You may have already heard of minimal pairs (Fig. 3), maximal oppositions, and metaphon (Fig. 2).

Minimal pairs involve contrasting two words, usually one that the child can pronounce and the other which he cannot pronounce yet. These paired words differ in only one sound. Maximal oppositions include several target words that the child cannot produce yet. Similarly to minimal pairs, such targets also differ in only one sound, in comparison to another word correctly produced by the child. The metaphon approach mainly consists of teaching the child to reflect on his own speech production mechanism so that he can eventually review his own output.

These are all evidence-based therapeutic approaches which fall under the umbrella of phonological contrast intervention, and can be selected and combined based on the child’s needs.

This intervention for phonological disorder is all about increasing the child’s ability to discriminate subtle differences between sounds and learn about how to produce such differences to convey meaning.

For example, a child who confuses front and back sounds might first work on the awareness of linguistic concepts of back and front; “Is it the front of the house or the back of the house?” (Fig. 2). 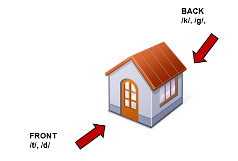 /k/ and /g/ are produced when the back of our tongue touches the roof of our mouth, /t/ and /d/ are sounds made in the front of our mouth where the tip of the tongue touches just behind our front teeth. If a child is consistently fronting, meaning substituting back sounds with front sounds, it is useful to highlight this with word pairs (Fig. 3). Can you say key?” “Yay! You did it”-pointing to the correct picture, “Try again, you said tea”- pointing to the wrong picture (Fig. 3). 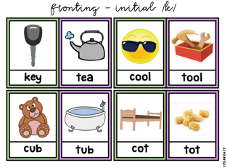 What does therapy look like for a child with Apraxia?

Therapy for Apraxia looks very different from therapy for Phonological Disorder. It is based on principles of motor learning, and therefore concerned with motor activities rather than conceptual activities. Its focus is to help children achieve controlled and functional speech through targeting volitional motor control in manageable speech movements, for example labial movements independent of the jaw to produce the Consonant-Vowel (CV) word “boo”. Speech targets increase in motoric difficulty as the child progresses on his program, and the therapist decreases her cues.

Therapy for Apraxia is often more intensive in frequency and dosage than therapy for Phonological Disorder. Phonological Disorder typically resolves quicker, especially if treated early, with the generalization to spontaneous speech of the linguistic rules taught at the word level. Apraxia, on the other hand, is a lifelong condition that needs consistent management, even after speech movements have been habituated and automatized, promoting intelligibility.

DTTC, ReST, NDP3 and PROMPT are all examples of evidence-based interventions for Apraxia and apraxic-like difficulties, which incorporate neuromotor principles, kinaesthetic and proprioceptive information, as well as auditory and visual information to provide feedback to the speech system.

Dynamic Temporal and Tactile Cueing (DTTC) is a pictureless approach designed for children of any age with moderate-severe Apraxia. Rapid Syllable Transition Treatment (ReST) is a high intensity treatment (four times per week for three consecutive weeks) for children able to read aged 4-12. NDP3 stands for Nuffield Centre Dyspraxia Programme 3:it is a large collection of therapy materials, procedures and techniques designed for children aged 3-7 years.

How can I find more information about PROMPT?

PROMPT is an acronym for Prompts for Restructuring Oral Muscular Phonetic Targets, which is most known for being a tactile-kinesthetic (touch and feel) approach where a Speech Therapist places her hands on the client’s face to guide his jaw, lips, and tongue to move correctly to form words, phrases and sentences (Fig. 4).

The Prompt Institute has created a series of videos explaining more about the PROMPT approach, and finding a PROMPT-trained clinician near you. 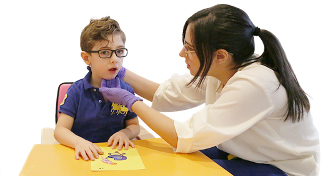 Should you have further questions, please do not hesitate to contact me at ebreglia@highhopesdubai.com