Story boxes and CVI: Because sometimes a dog looks like a fruit 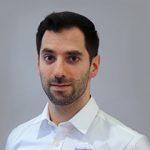 Reading to young children is one of the most powerful ways to help them engage with literacy, but children with CVI may only focus on the auditory input, finding the visual elements of the book too challenging to attend to. Story boxes allow us to take a meaningful book that may be too visually complex for a child with CVI and couple it with real objects that are visually accessible, and make the reading experience richer. Story boxes have great applications for children who have ocular visual impairment or are blind, because they can provide tactile information about texture and shape. Children with CVI also benefit from them, because the real objects contained in a story box also convey more visual information than an image can.

Here’s an example of misinterpreting visual information due to the quality of an image. I was recently working with a seven-year-old girl I’ll call Yara, who acquired CVI recently due to an illness. I wanted to show her a number of cartoon illustrations of animals to see what she would recognize. I asked her about this picture of a dog: 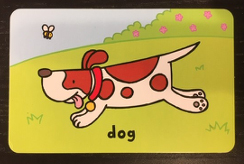 “Banana. That’s a banana.” Yara was pretty confident in her answer.

I looked at the picture again and tried to understand what she was seeing—and then I saw it. The slope of the dog’s back had the subtle curve of a banana. The brown spots may have reminded her of the way spots develop on a banana. The dog’s tail resembled the stem of a banana. Even the dog’s nose was dark and round like the end of a banana.

I happened to have brought a banana as a snack, so I pulled it out and showed it to her. She looked at the fruit.

I showed her a different photograph of a dog—this one was a high-quality color photograph—and she immediately identified it as a dog. Then I showed her the cartoon dog again, and told her it was not a banana. She took a few moments to inspect it, and then finally concluded it was also a dog. “How did you know?” I asked.

“Because it has a collar here,” she said, pointing to the dog’s neck.

I agreed with her, but then helped point out why her first answer makes sense. “I see why you said it was a banana, because they both have spots and are curved, the tail looks like a stem, and the nose looks like the end of the banana. But we know this is a dog because it has a collar, and four legs, and two ears.” (This is the critical process of helping Yara engage in comparative thought—explaining what makes things similar and different.)

Yara’s dog/banana misunderstanding is important because while she is able to put her thoughts into words about what she is seeing, many other children with CVI cannot. We can assume that many of these children have the same kinds of challenges in decoding abstract images and cartoons. And these are often the kinds of illustrations that are common to many story books for young children. By replacing abstract images with real objects, we can provide concrete examples that contain far more salient features and visual reference points than a drawing would.

There are no rules about which kinds of books are better suited to making a story box out of, but I think the story should be meaningful and relevant to the child and family. Story boxes can also be easier to assemble if the characters in the story interact with real concrete objects that can be represented and added to the story box. I’ve made a story box for the book Goodnight Moon by Margaret Wise Brown and Clement Hurd. This book is about saying goodnight to the everyday items present in a young child’s room. The book features two kinds of images:

Color images of the entire room, which contains a high amount of complexity of array, and which become progressively darker through the story. 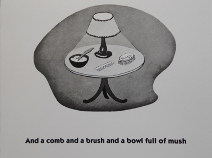 And black and white drawings of individual elements in the story. These are less complex, but also do not have the color that supports vision for children with CVI.

My story box was made from things I had on hand, and simply consists of the real objects in the room.

To use the story box, I may present the cover of the book, because it is a visual that represents the story we are telling. I read each line of the story, pausing to present each object by itself against a black background. I add light and movement as needed to support attention, and target the child’s preferred field. It is important to allow plenty of time between speaking and presenting objects, so the child can process visual and auditory information separately. For children who are reaching, I encourage them to touch the objects, notice the salient visual features, (the comb has a handle and one row of bristles…) and compare textures (the balloon and the “mush” were both squishy, weren’t they?) If some element of the story has been fundamentally changed by the use of the story box, it is good to mention this. (I think when they say “mush” they mean oatmeal or porridge. But we are using this squishy ball instead. Maybe we can try oatmeal later?)

These objects can be stored in a small box with the book and explored each time the book is read. The child can be encouraged to view the objects, or reach and interact with them. Once they are familiar, the child could be presented with two of the objects, and asked to look at or point to the one that was just mentioned in the story. These items can spin off into other activities that deepen the child’s understanding of what they are and how they are used, such as comparing the real item to a similar realistic photograph. As functional vision improves, the story could be re-told using real photographs of these or similar objects, viewed on a backlit display to add support for light and color. Tar-Heel reader is a great website that helps with the creation of accessible photo books, with many books already made. Pictello is a great app for iPad that serves the same function, with the ability to add auditory support.

A parent’s experience: Me, Too!

During the coronavirus crisis, one family worked to develop a story box at home to broaden literacy activities for their child with CVI. Sally, mother to Masa, collected and made objects to accompany the book Me, Too! by Mercer Mayer. 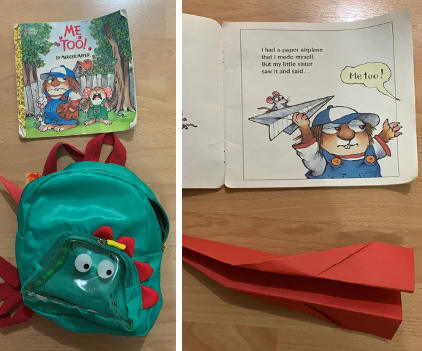 In the story, a boy tries to find activities that he can play by himself, but his younger sister always wants to come along and join in. Sally trialed and modified some of the objects to better suit Masa’s needs, such as creating a paper platform that a sled could sit on so that Sally could create movement using the paper to help attract Masa’s attention. 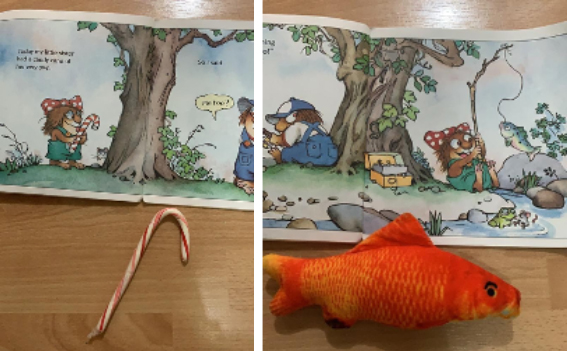 One neat feature of this story box is that it features a backpack to represent hiking, but this object also serves to store the book and all of the objects when they are not in use. Sally was careful to choose objects that feature red, especially used in places to show the function of an object, such as the characteristic straps of the backpack. This was a great way to make this book accessible for Masa.

Story boxes are just the beginning

Story boxes are a fantastic early literacy tool, but with objects alone, they miss out on a critical aspect of literacy—the PRINT! Attention to and interaction with objects is a wonderful starting point for children with CVI, but there are several ways to move forward once the book becomes familiar to support understanding of letters and print literacy. Objects can be paired with CVI-friendly letters that match the initial sounds of the object (e.g. M for “moon”). Objects or parts of objects can be glued to a page and accompanied with target words. The story can also be edited and simplified, with text accompanying photos of the objects in your story box which are presented on a tablet-based book building tool. The Roman Bubble Letter app can be used to convert select parts of text into bubble words that can be added to a digital version of the story. Each child may take a different path forward with literacy, but it is important to consider print as a viable option for children with CVI, and provide supports to allow access to print. A good place to start is exploring phonemes, or letter sounds, and pairing them with graphemes, or letter shapes.

Story boxes may more effectively communicate each individual object chosen from the story, but those objects together may not hold as much context to the story as a richly illustrated picture would. We can address this by building up the plot and morals of the story over time, and comparing what happens in the story to events in the child’s life. We can also teach the salient visual features of the objects in the story and point them out whenever they are viewed in real life or images, to help tie the story together.

There are some great resources for making story boxes on the Paths to Literacy website:

Feel free to address questions or comments to Jonathan at jgraves@highhopesdubai.com. Read more from the CVI series: