What happens early lasts for a lifetime: Early intervention in children with developmental delays 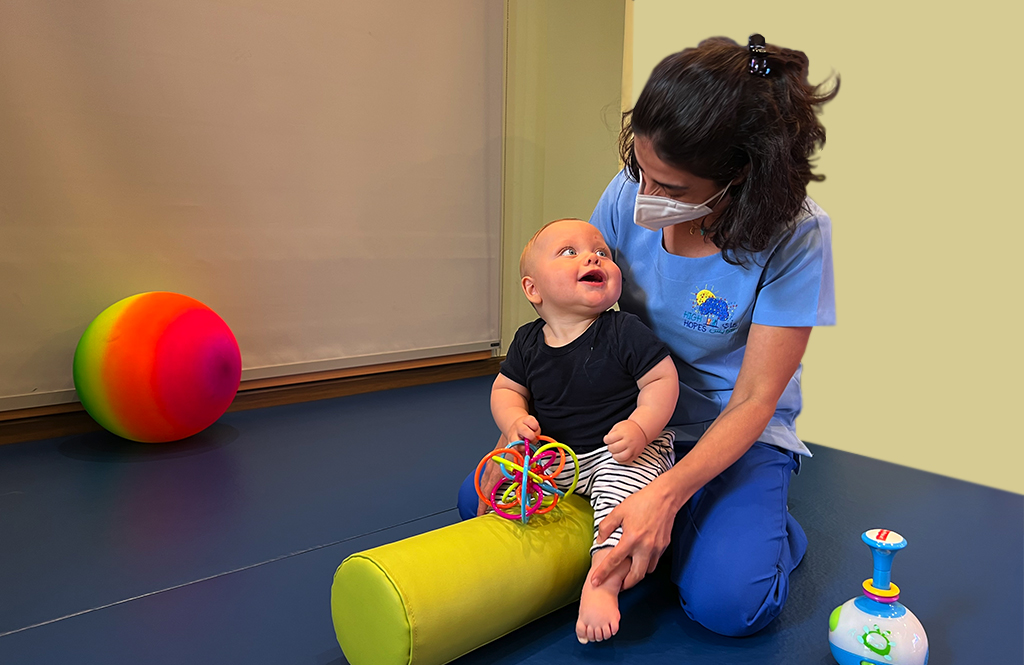 Babies are born ready to receive and capture all kinds of stimulation: auditory, tactile, visual, etc. This helps guarantee proper neuromotor development, the basics of which underpin the importance of early intervention programs in children presenting developmental delays or disorders.

Early childhood is a critical period where experiences stimulate brain development and functioning1, and the American Academy of Pediatrics (AAP) recommends developmental surveillance at all preventive care visits and standardized developmental screening of all children starting at the age of 9 months. Furthermore, the Centers for Disease Control and Prevention (CDC) advises parents to track their child’s milestones from the age of 2 months and has provided them with this milestone tracker checklist (click here). The CDC also suggests discussing a child’s development with the medical doctor at every medical visit.

Surveillance and detection programs help identify a developmental delay at an early stage, therefore, medical investigations defining underlying factors will help establish an early medical diagnosis. The widespread adoption of these programs might explain the 9.5% increase in the prevalence of children with developmental disabilities from 2009 to 2017, where > than 1 in 6 children (nearly 17%) between the age of 3 and 17 years in the United States presents a developmental disability2. In response to these early detection programs, several early intervention programs have been designed.

While genes deliver the brain’s master plan, childhood experiences influence the process that provides the brain with either a strong or weak foundation for all future learning.
The period of brain development stretches from birth to the age of 6 years, with 80 to 90% of brain development occurring by the age of 23,4 (Figure 1). During this period, millions of cells called neurons send electrical signals to communicate with each other. These connections form circuits that become the basis of brain architecture. Circuits and connections proliferate at a rapid pace and are reinforced through repeated use.

A child’s experiences and environment define the circuits and connections that get used the most5. Simple circuits come first, providing a sound foundation for more complex circuits to build on later. As the most used connections become more prominent, the less used connections fail to evolve. 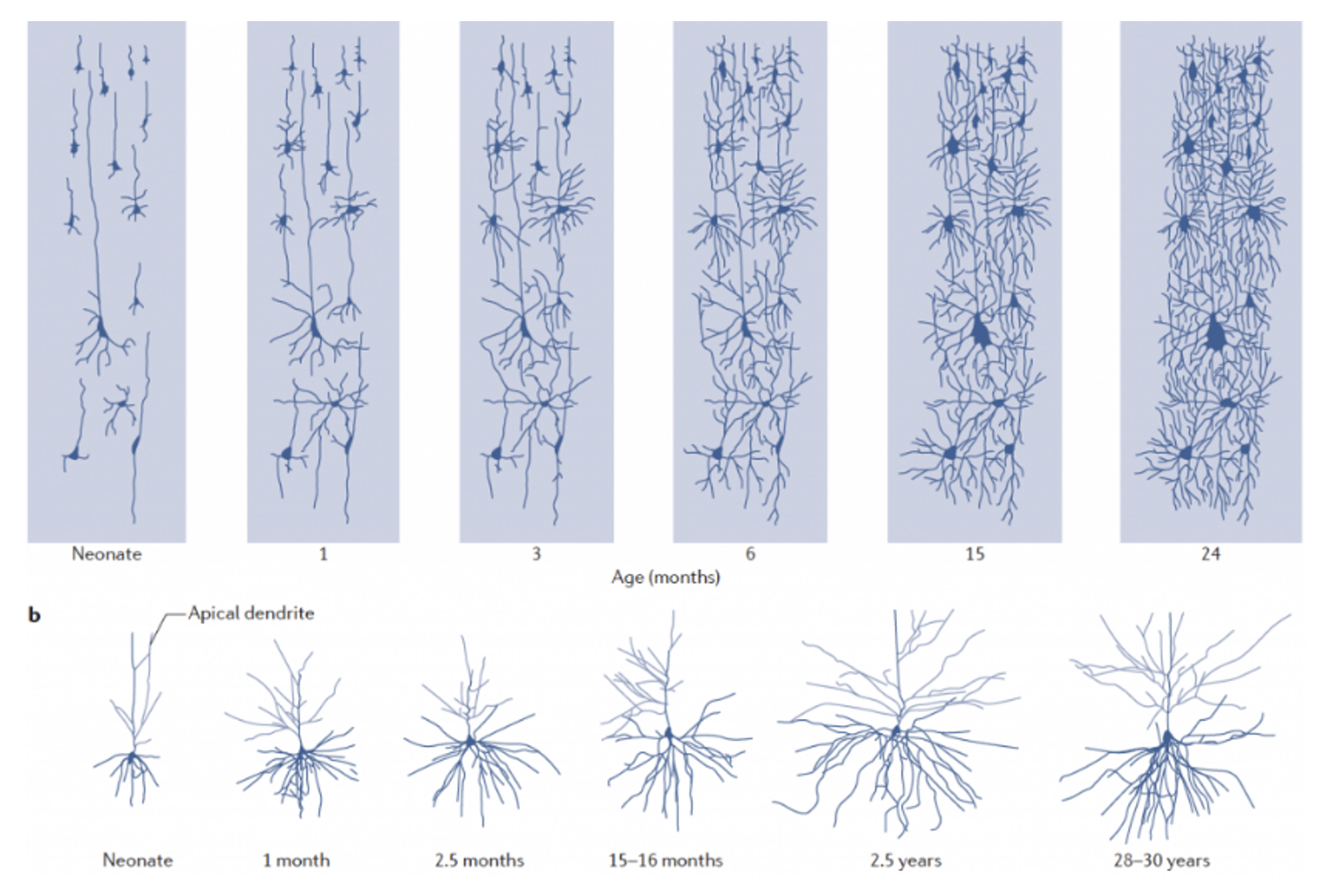 The circuits and connections formed by neurons enable the child to gradually master motor, visual, sensory, and emotional skills as well as language, memory, and behavioral control in the early period of development. Since these circuits are interconnected, it would be impossible to develop one type of skills (visual, motor, sensory…) without developing complementary types of skills. Conversely, a child with a developmental disorder might exhibit other types of delays. For instance, a child who presents an increased muscle tone called spasticity, which prevents them from exploring the environment with their body, might present language and sensory alterations.

Early therapeutic interventions, such as physical therapy or occupational therapy, provide the child with an adapted environment that offers the optimal conditions needed to build complex circuits in the brain6, enabling the child to develop their motor, sensory, and language skills.

The ability of the brain to adapt and reorganize according to the child’s experiences and environment is called brain neuroplasticity.

How and when do we make the most of this neuroplasticity in case of a developmental delay?

The brain has more neuroplasticity in the early years and its capacity for change decreases with age7. The major advantage of intervening early in life is that the brain is highly plastic from birth until the age of 2 years8,9 (Figure 2). Hence, the importance of early intervention programs is widely recognized in children presenting developmental delays or disorders. The programs comprise “multidisciplinary services provided to children from birth to 5 years of age to promote child health and well-being, enhance emerging competencies, minimize developmental delays, remediate existing or emerging disabilities, prevent functional deterioration, and promote adaptive parenting and overall family functioning”9. The services span the fields of physiotherapy, occupational therapy, feeding support, as well as developmental psychology and education.

Early intervention in children who either present or are at risk of developing a developmental delay should be adapted according to age. For example, the type of intervention that might be effective in preterm infants with low weight birth is different from that adopted in the case of a child presenting a genetic deficiency with an early diagnosis.
The various early intervention programs include10.

Stress reduction: This intervention might enhance the capacity of babies to cope with the extrauterine environment and is mostly applied on premature babies who are known to present a high risk for developmental delays. It consists of controlling stressful environmental conditions and optimizing positive input through stimulating mostly sensory pathways by, for example, exposing the child to either music or their parents’ voice, or providing them with a sense of containment by adopting different positioning, mimicking the intrauterine environment.

Sensory stimulation: This program can be applied as early as on the day of birth. Single (unimodal) or multiple (multimodal) specific sensory modalities are stimulated such as auditory, tactile visual, and vestibular stimuli. This intervention could also be reinforced by verbal encouragement as part of a general developmental program.

Motor intervention strategies: Active intervention has demonstrated more efficacy compared to passive handling, by encouraging the child to train their motor abilities, such rolling, sitting, crawling, or walking. Practice and repetition are important components in this type of intervention where it is important to reinforce the child’s motivation by creating a playful setting and positive feedback.

Early intervention programs, if properly timed and implemented, can make a substantial difference in the developmental outcomes of a particular child. The involvement of parents, therapists, and medical doctors is pivotal to optimize the child’s participation in daily life activities.

High Hopes offers a multidisciplinary, parent-centered treatment approach, which takes into account the different aspects of a child’s development. Our team is trained to make changes to the environment is terms of visual, sensory, or other adaptations—always in playful and joyful conditions—to optimize treatment outcomes.